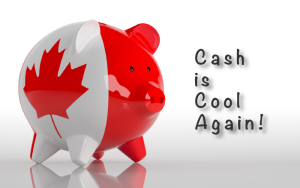 Fun to see that cash might be back as a cool demonstration much like a fashion accessory.  Flashing cash as a method of payment seems to be one more new trend that has come about as a result of the pandemic.  Many of us have read about the money being stored in bank accounts, but it may also be in piggy banks in our homes.  Paula Cachero updates us on how cash is cool again and getting some play on TikTok… read the article here

After being hard hit financially by the pandemic and the surging inflation that followed, the generation entering adulthood is meshing their love of late-‘90s nostalgia — think cargo pants, bucket hats and disposable cameras — with a dose of old-fashioned frugality.

One viral TikTok challenge has users smashing Hennessy bottles to access bills they’ve been stashing for months. Another trend includes organizing extra cash into envelopes dedicated to various expenses. Others, like 21-year-old McKenna Alvizo, are simply flaunting the items they paid for with cash — which, in their minds, is basically “free.”

“It’s a thought process that a lot of us have,” she said. “If I don’t have to see a deduction from my bank account, it doesn’t feel like I spent it.”

To be sure, consumers’ overall use of cash has declined steadily in recent years as digital options like Venmo and Apple Pay compete with credit cards that now offer contactless payment. And the pandemic was hard on greenbacks, as even more Americans gravitated to online shopping and worried whether viruses could be transmitted via paper money.

But it appears cash use may have bottomed out in 2020, according to the Federal Reserve Bank of San Francisco’s most recent Diary of Consumer Payment Choice. Cash accounted for 20% of all payments in October, up from 19% a year earlier, which marked the first increase since the diary began in 2016.

One of the factors encouraging more frequent cash use is discounts offered by small businesses, a trend that’s picked up since Visa and Mastercard hiked credit-card swipe fees for merchants in April. In addition, racking up credit-card debt is getting more expensive, with the average annual percentage rate hitting 16.98% last week, the highest level since March 2020, according to CreditCards.com. With inflation at a 40-year high, it’s another incentive for belt-tightening consumers to use greenbacks.

Gen Z is more likely to pay with cash than people aged 25 to 44, according to the San Francisco Fed. And a recent survey by Credit Karma found that 45% of Gen Z respondents prefer cash for everyday purchases, with 33% of those saying they feel like they have more control when they use cash, and 25% saying they don’t want to rack up debt.

For Gen Z, cash’s vintage vibe only adds to its appeal, said Jason Dorsey, president of the Center for Generational Kinetics.

“Gen Z is a throwback generation,” he said. “The act of carrying cash is still new and different.”

While the TikTok videos of cash transactions are often fun and light-hearted, they obscure the pragmatic and conservative way younger Americans approach their money.

Gen Z’s finances were bruised by the pandemic: 43% of those aged 18 to 24 reported that they fell behind on credit cards, rent and other payments, according to a 2020 study from the Center for Generational Kinetics. Now, decades-high inflation is hitting them particularly hard, instilling a fear of debt.

“They’re in a place where they’re trying to limit risk,” Dorsey said. “They want to know about fees and all of the costs associated with a payment method. Cash is this tangible store of value without surprises that allows them to limit their spending.”

Lisette Pedraza, a 25-year-old veterinary assistant in San Diego, said storing cash in envelopes helps her save for big-ticket items, like the $3,000 she stowed away for a down payment on her car.

“If I know there’s extra in my savings account, I feel inclined to spend more money,” she said. By contrast, cash that’s already withdrawn from her account “feels free.”

Having seen the financial struggles of their older friends and family members, one in five Gen Z respondents said debt should be avoided at all costs. In fact, 64% of Gen Z consumers reported that they don’t have a credit card at all. That includes Alvizo, who exclusively pays with cash and a debit card.

“You have this unlimited amount of money that you get billed for later and I wanted to avoid that,” she said.

Other financially savvy TikTokers are using physical money to overhaul their finances through “cash-stuffing” — a saving strategy in which people track their spending by distributing a set amount of money across various envelopes dedicated to regular expenses and longer-term goals.

Laura Castellanos, 23, was fed up with living paycheck to paycheck and felt she was “constantly swiping” her cards but didn’t know where her money was going.

After watching a YouTuber demonstrate cash-stuffing in March 2021, Castellanos also started several cash binders where she allocates different sleeves to various saving goals. As many as 11 million have watched videos on her @abundantgains TikTok account, which show her distributing anything from $5 to $100 bills from a stack of cash into funds for a vacation and more. In a little over a year, she has saved about $20,000.

“When we’re using cash, we are taking control of our money instead of it controlling us,” she said.

Find out how much of a gift is tax-free in Canada?